I enjoy learning new skills and meeting new people and Simbi offers a lovely way to do that!

Mark received his Bachelors of Music degree in Bass Performance from Minot State University in North Dakota under Dr. Erik Anderson. He then went on to earn his Masters degree in Bass Performance from the Royal Conservatoire of Scotland under John Van Lierop of the BBC Scottish Symphony Orchestra and Tom Martin, former Principle Double Bass of the London Symphony Orchestra. While in Scotland, Mark won an apprenticeship competition for the privilege to perform with the Royal Scottish National Orchestra. He has also played in masterclasses for internationally recognized soloists Yehuda Hanani and Joel Quarrington. Mark and his wife Maggie both happily perform and teach music together in Portland, Oregon. 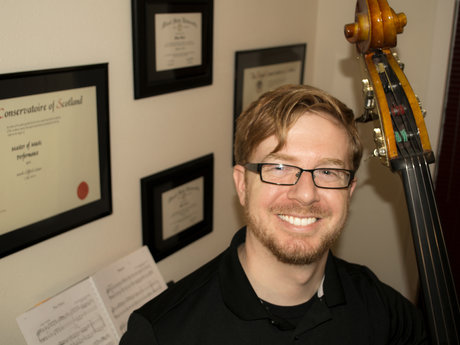 I enjoy learning new skills and meeting new people and Simbi offers a lovely way to do that!
Mark C. | Portland OR
(N/A)
View

Jessie provided session of Feedback on Your Website for Mark

Jun 15, 2017
Mark was great to work with. I wish him the best of luck with his business. Thanks!
See Ker

May 26, 2017
Mark is a great teacher, able to clearly explain aspects of technique in a way that allowed me to pick up new chords easily. I am looking forward to w...orking with him again!show more

Services Mark Cuneo is looking for: